How wealthy is Derek Luke? What is his salary? Find out below:

Derek Luke net worth: Derek Luke is an American actor who has a net worth of $5 million. Derek Luke earned his net worth through his acting roles in television and films. He played the part of Antwone in the film Antwone Fisher in 2002 and won the Independent Spirit Award for his performance. This film was directed by Denzel Washington as his first position as Director of a major motion picture. Derek Luke was also cast as Joshua Hardaway in the film “Madea Goes to Jail,” as Sean (Puffy) Combs in “Notorious,” as Speck in the 2012 film “Seeking a Friend for the End of the World” as Boobie Miles in the motion picture “Friday Night Lights” and many more. He has also had roles in several television series and sitcoms such as “King of Queens,” “Trauma,” “CSI: Crime Scene Investigation,” “Moesha” and as an assistant surgeon on TNT’s “HawthoRNe.” He has also appeared in music videos for Alicia Keys “Teenage Love Affair,” and for Monica’s “So Gone.” Derek Luke was born in Jersey City, New Jersey in 1974. He attended Linden High School and Snyder High School and graduated in 1993. He began his acting career in 1999 with the role of a nurse on the “King of Queens” sitcom. Luke married Sophia Adella Hernandez in 1998.

Do you also want a net worth like that of Derek Luke? Here are some inspiring Derek Luke quotes that might help you boost your net worth:

I went to college for one semester, and I took every subject I could, and I ended up failing. So I thought to myself, Ever since I was a kid, I’ve loved expression – and that’s when I started thinking about acting. 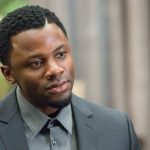 Then I was working in a store in Newark, New Jersey, and I saw an actor in person, and I got so excited. My whole day changed. That’s when I decided to challenge myself to make my dreams become a reality.

Hip-hop was my first audience – I would rap in the mirror, walk down the street and listen to my Walkman.

I want what’s mine. I see other actors who are doing very interesting roles, and I just want to continue to do things that are interesting, and things that people will go see in theaters.